Over Xmas week, I christened my new gift, a KitchenAid Mixer on a Stand, by making this  cherished recipe passed down to me by me aunt, Joy Collingridge.  It was an added bonus for me to discover that this recipe is in keeping with my new year's resolution to be more health conscious about the desserts I make. 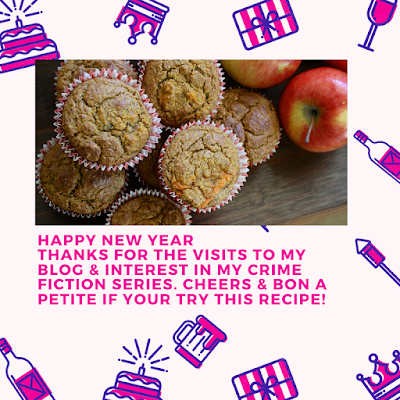 Notes:  1) Makes 24 Regular Sized Muffins. 2) I substituted 1.5 cups of regular brown sugar for 1 cup of Splenda Brown Sugar). 3) Don’t bake the 1st day.  Can keep bowl in fridge for up to 7 days and bake muffins fresh daily. This recipe may be doubled to make 48 muffins. 4) On the Weight Watchers Ap, this muffin recipe is 5 points each ( 4 if dates are omitted).

Instructions:
In a large bowl, add dry ingredients and stir in Bran Flakes.
In a separate bowl, cream shortening, sugar, molasses, and eggs.  Add the All Bran (soaked in hot water) mixture, then stir in the buttermilk.  Mix all ingredients together. I used a KitchenAid mixer stand set at a speed of 2 with a beater for cookies, cakes, or muffins or you can mix by hand.  Then add fruit (if desired) before scooping into muffin papers.
Bake:
Set oven at 375 F. Bake for 23-24 minutes.

Posted by Donna J. Warner, Crime Thriller Author at 08:52 No comments: Links to this post

GETTING INTO THE XMAS SPIRIT AT THE ELLIOTT XMAS BAZAAR

Gloria Ferris and I want to thank the bazaar coordinator, Marta Braga, and all the residents and visitors who came to our vendor fiction book table to chat or buy signed copies of our mystery, urban fantasy, and thrillers. Meeting such interesting people was the highlight of this event.

Posted by Donna J. Warner, Crime Thriller Author at 07:10 No comments: Links to this post

As Canadian authors of books featuring Mysteries, Crime Fiction, Murder Thrillers, Urban Fantasy, & Romance, Gloria Ferris and I are delighted to once again be invited to display our novels and novellas for sale and signings at this popular Nov. 30th Christmas Bazaar. When we participated as vendors last year, we were impressed by the vast selection of products for sale by fellow artists and items donated for the ticket draw gifts. If you attend this event, please stop by and visit Gloria and I at The Elliott Community's Christmas Bazaar on November 30th in Guelph, Ontario. 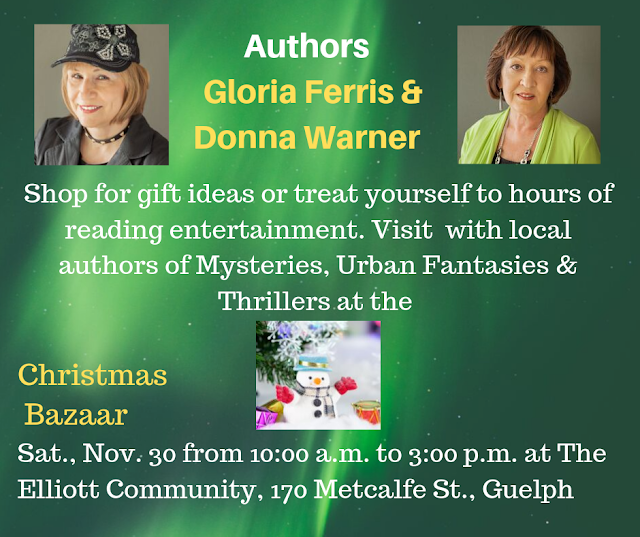 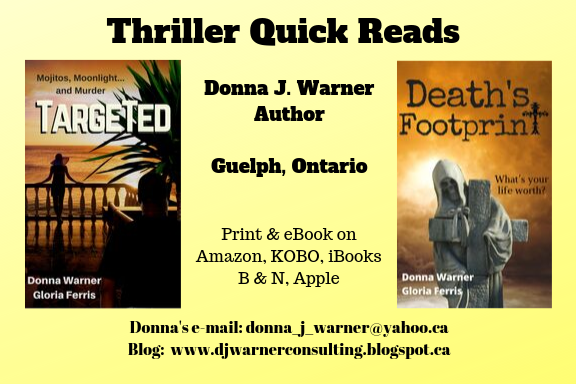 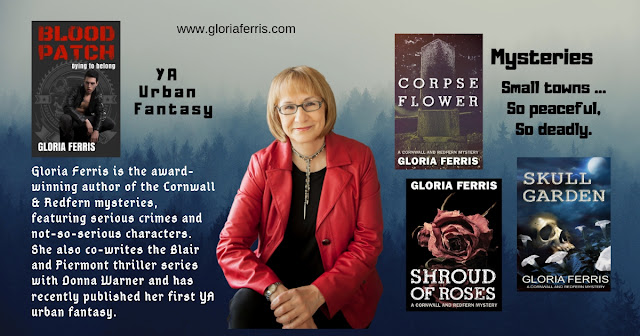 Posted by Donna J. Warner, Crime Thriller Author at 09:46 No comments: Links to this post

A BOOK IS MORE THAN WORDS

I’ve been reading and reviewing indie paperbacks for some years now. I also read a lot of traditionally published work. I also run a small indie press, producing a handful of books by several authors each year.

Something too few self-published authors, and, to be fair, micropress publishers, fail to consider is the interior design of their books. We know covers matter, but inside that cover, a book is more than its words: its story should be set off by good interior design the way good framing sets off a picture. Established publishers know this, and they have art and layout departments dedicated to this. They know a reader, even when attracted by the blurb, will open that book, flip through it, and if the interior turns them off, they are unlikely to read it. Indie authors and little presses rarely have design expertise, but there are still simple things that can be done easily and will improve the interior appearance of a book.

I may run a very small press, but the books we produce are competing against those published by big houses, and when a customer picks up one of our books in a bookstore, I don’t want it to be the interior design that makes them put it down. I want it to look no different than the others. (If your work is avant-garde or experimental, you have good reason to want a different look. But if you’re not, then my view is why start off one step – or more – behind?)

Justification
Pick up any traditionally published book, paperback or hardback, and almost without exception the text is fully justified. Almost nothing screams ‘self-published’ to me as much as left-only justification. Any word-processing program will fully justify a manuscript, and yes, you do get some odd spacing occurring. Often those are caused by a hard return where there shouldn’t be one, and sometimes it’s because of very long words. It’s not my intent here to list all the solutions but one: google it, including in your search the WP program you’re using. The answers are out there!

Spacing
Between-line spacing does depend to some extent on genre, but generally you’re looking for about 32 – 38 lines per page for an adult book, if every line is text. Unless there is a scene break, paragraphs should not be separated by a space!

Scene breaks.
If you decide to mark scene breaks, whether time shifts or POV changes, with a marker (and it’s not necessary: you can just use extra blank lines), you can use the conventional three (or five) asterisks. But there are other options. Consider using a symbol appropriate to the story for a POV change, as seen here. (This book has a rural, Prairie setting.)

I have seen some creative uses: different symbols for different speakers, for example, but don’t go overboard. You want a clean interior, not clutter.

First lines.
Options abound. Dropped caps are popular, and most WP programs do them.

Another popular option is the partially-bolded first line (sometimes combined with an initial dropped cap.) The text body font can be used, or the chapter heading font, if you choose to go this route.
Picture 3: Partially-bolded 1st line

But it isn’t necessary to do it at all: many traditionally published books, especially paperbacks, don’t. But whatever you choose to do, one thing should be kept in mind: the first line of a chapter is not indented.

Chapter headings, running headers and footers, page numbers.
The placement of your chapter numbers or titles is up to you: centred or right-justified are typical. So too is the size. Many publishing houses like to start a chapter nearly half-way down the page, with the chapter title or number in a large font suitably balanced in the space above it. But not all. Your chapter heading should be in a different font, one appropriate to your genre (see the section on fonts below), and larger than your body text, and there should be three lines or more between your chapter heading and the body text. The larger your chapter heading font, the more space you need to leave between them, for a pleasing-to the-eye balance on the page.

Running headers.
Usually these have the author’s name on one page (usually the left-hand page) and the title of the book on the right-hand page, but there are other versions. A quick perusal of books on my bookshelf shows title on left and page number on right; title on left and chapter name on right, and just about any other combination you can think of, including no running headers at all. This one is entirely up to you, but if you use them, keep them small, and greying them down from full black isn’t a bad idea. They are fiddly to set up (at least in Word) as they only belong in the body of the book, after the front matter, and not on the first page of Chapter One, either.

Page numbers:
Header or footer, centred or not, your choice. Necessary, though! Convention (why?) says the first page of Chapter One may not have a page number, and if it does it is 3, 5, or 7, although I am beginning to see this abandoned by some publishing houses. Right-hand pages are odd, left-hand even.

Paper choice:
The next big ‘self-published’ scream for me is white paper. Of the hundreds of books on my shelves, fewer than 10% published by large publishing houses use white paper, as opposed to ivory, and all but one of those are non-fiction scholarly research works. Ivory or cream paper is easier on the eye, especially but not only for older readers. You want your reader to keep reading, not put the book down from eyestrain.

Font Choice:
Font choice is an art and a science. I won’t pretend I’m an expert: I google it, see what the recommended fonts are for genres, and then work with our authors to find one within those they like. For my own books, which are set in an analogue world similar to dark-ages Europe, with some strong Roman influences, I use ARJulian for titles, chapter headings, and first-line bolding, because it has a strong Roman feel:
Picture 4: Font choice

The best thing any author self-publishing or working with a small press can do is visit their local bookstore. Take the time to look at all these features in books in your genre; see what they do (and don’t do). Look for commonalities, and where they differ. What do readers expect? What features make a book attractive to them?

The best compliment I’ve had on books produced by my press came when I took them to a local bookstore to discuss if they would carry them, and the reaction of the seasoned bibliophile to whom I spoke was, “These are beautiful. They look as if they came from an established house.” After all the time and work and parts of your soul that go into the book you’ve written, doesn’t it deserve to be the best thing it can be?


Bio:
Not content with two careers as a research scientist and an educator, Marian L. Thorpe decided to go back to what she'd always wanted to do and be a writer. Author of the alternative world medieval trilogy, Empire"s Legacy, Marian also has published short stories and poetry. Her life-long interest in Roman and post-Roman European history informs her novels, while her avocations of landscape archaeology and birding provide background to her settings. As well as writing and editing professionally, Marian oversees Arboretum Press, a small publishing imprint un as a collective. Marian is currently writing Empire's Reckoning, the next book in her series.
Posted by Donna J. Warner, Crime Thriller Author at 11:50 No comments: Links to this post 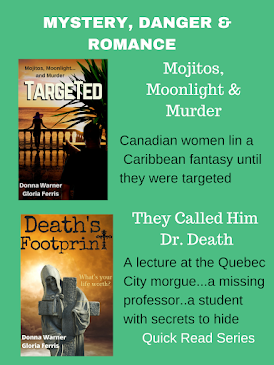 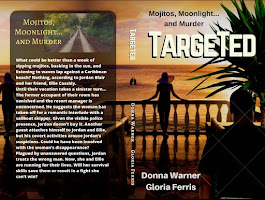 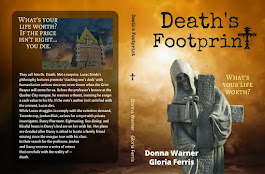